Solving keyboard layout issues in an ICA or RDP session can be quite tricky. In this article I deal with some of the common causes and their solutions.

Let's start with a list of the most common keyboard layout issues. Each issue is linked to a section in this article that describes the causes and solutions:

As you can see in the previous list, keyboard layout issues can present themselves in different ways. The following paragraphs describe the causes and solutions for each of the scenarios above.

The registry value IgnoreRemoteKeyboardLayout is either configured or missing

The registry value IgnoreRemoteKeyboardLayout is a "golden oldie" in the world or Remote Desktop Services and Citrix. This value is configured on the Remote Desktop Session Host or Citrix worker (VDA).

First of all, IgnoreRemoteKeyboardLayout is a registry value that you set on the Citrix worker (the VDA):

A reboot is not necessary. For this value to take effect you only need to close your current RDP or ICA session (in case you have one open) and launch a new session. This setting is a local machine setting, so it applies to all users (and administrators!).

As said, this registry setting has been around forever and still applies to all server operating systems including the latest one, Windows Server 2019.

By default, the registry value IgnoreRemoteKeyboardLayout is not present on the local system. In case the value is present, but you want to use the local keyboard layout of the user's client device instead, you can either delete the registry value or change it from 1 to 0.

Citrix Workspace app is configured to use either the local or remote keyboard layout (APPSRV.INI)

Citrix Workspace app includes several advanced preferences, one of which is the Keyboard and Language bar. 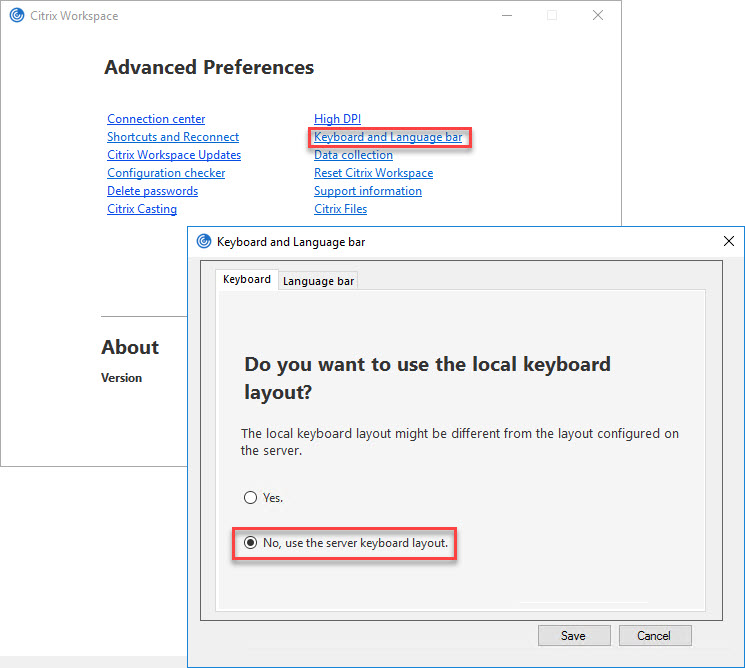 This setting is actually stored in the APPSRV.INI or at least it will be when you change it. The APPSRV.INI has been around for a very long time, since the early releases of Citrix Receiver. The file APPSRV.INI is a user-specific configuration file and is located in the following directory:

Selecting Yes in the above screenshot adds a new entry in the APPSRV.INI file: LocalIME=1

Set this value to 0 if you want to disable the keyboard synchronization feature and use the server-side keyboard layout.

There is actually a second value that can be configured in the APPSRV.INI to set the keyboard layout (which has been around for a long long time): KeyboardLayout

The settings described in this section only apply to ICA sessions and not to RDP. In comparison, the  registry value IgnoreRemoteKeyboardLayout applies to both RDP and ICA sessions.

In the previous section I described the keyboard synchronization feature (local IME). It is important to realize that this feature can also be managed from the Citrix worker (VDA). It is possible to enable or disable the feature by setting the following registry value:

You can use a Group Policy Preference item to set the registry value. 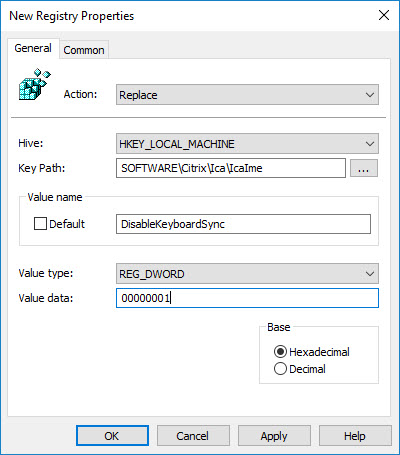 In case you are sure that you have configured the settings in Citrix Workspace app correctly (and you have taken operating system specific issues into account) and the keyboard layout is still incorrect, you may have to enable or disable this setting.

The settings described in this section only apply to ICA sessions and not to RDP.

For some reason though, the keyboard layout in the active session is changed on occasion although the local keyboard layout was not altered. The exact reason why this happens is unknown (the Citrix support engineer, although providing the solution, was not able to explain the exact cause either).

The solution to this problem is to disable the keyboard synchronization feature on the worker (VDA). This is done by modifying a registry value as described in the section Local IME.

Configuring this registry value (1 = disable) actually solved this issue for me!

What is strange about the whole situation is that:

This issue is also described in the Citrix article Receiver | keyboard language set on VDA is over ridden by the one set on the endpoint.

Citrix CTA Julian Mooren also describes this problem on his blog in the article XenApp – Keyboard Layout is switching occasionally in MUI environment.

The settings described in this section only apply to ICA sessions and not to RDP.

I hope the information presented in this article was of some help to you.