Recently I was asked how to leverage the Citrix Workspace app SelfService.exe programatically with the added requirement to be able to parse more than one parameter. After some testing, it turns out that parsing multiple parameters is possible, but you have to be very precise in your syntax. One small mistake and you will be scratching your head wondering why the parameters are not being parsed to the published application. In this article, I provide a general overview of the SelfService.exe and I will demonstrate how you can handle the parsing of (multiple) parameters.

Using the SelfService.exe on the command line

The SelfService.exe is part of Citrix Workspace app. This executable aggregates (retrieves) a user's resources. With resources I refer to published applications and published desktops. The SelfService.exe connects to StoreFront, assists in the authentication process, retrieves the list of available resources for the current user and parses the launch command to the Citrix HDX engine (wfica32.exe).

Most applications (and desktops) are launched interactively by the user, meaning that the users clicks on an icon, either in a browser or in Citrix Workspace app. The user is presented with a list of applications and selects the one he or she wants to launch.

Leveraging the SelfService.exe on the command line allows Citrix administrators and application owners to launch published applications directly from a local application installed on the user's endpoint device (e.g. laptop/desktop) without requiring any user interaction.

Let's take a closer look at how this works.

The SelfService.exe passes the launch command to the Citrix HDX engine (C:\Program Files (x86)\Citrix\ICA Client\wfica32.exe) to establish the session.

And the published application is presented.

How to launch a published application with multiple parameters using the SelfService.exe?

To accomplish this we need to do the following:

How to launch a published application with complex multiple parameters using the SelfService.exe?

In some cases the list of parameters may be more complex, for example:

Most steps described in the previous section still apply, except for the command line argument in the published application. This should be %* instead of %**. The argument %* only accepts one argument which is all we need. In this example, we will use a PowerShell script to interpret the parameters parsed by the SelfService.exe. In the screenshow below you see the exact syntax that I used to call the PowerShell script. 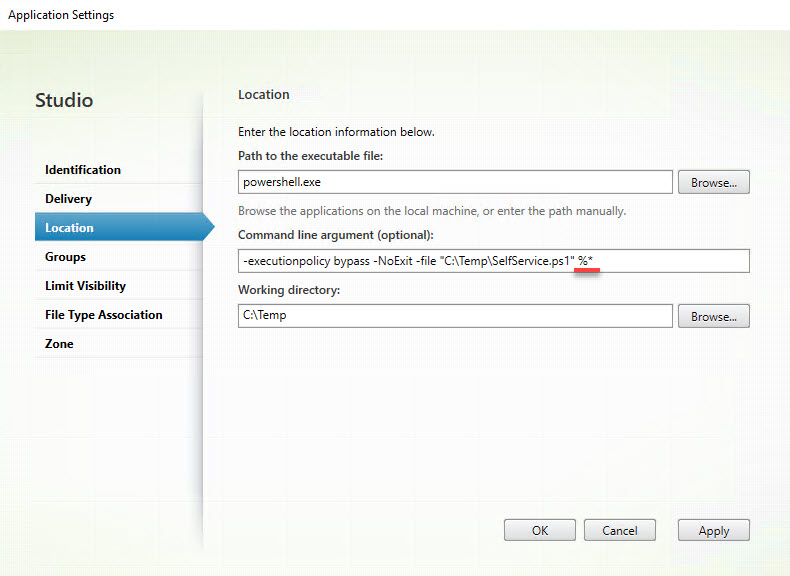 All parameters should be between quotes and each individual parameter is separated using a comma. This allows the PowerShell script to interpret the parameters as an array. The comma is what separates each argument. The added benefit of this approach is that a space within one parameter does not matter since the main separator is the comma and not the space.

The PowerShell script that has to do all the hard work will look something like this:

The script splits the "master" parameter based on the comma. Each comma-separated item is then stored in its own unique variable:

If a parameter does not contain a value, the corresponding variable is set to <unknown>.

From here on you can expand the script to whatever is required such as launching an application.

I hope that this article helps you to utilize the SelfService.exe programatically. In case you still have questions please leave a reply at the bottom of this page. Cheers!