Encrypting passwords in a PowerShell script remains a bit of a hot and tricky topic. There are various ways how to parse a password. The golden rule is that you do not want anyone to be able to read passwords in your scripts. This means that you should refrain from using plaintext passwords!

In case you do want to use a plaintext password (for testing purposes for example), use the following PowerShell command to create the PSCredential object (called $DatabaseCredentials in the example below):

The PSCredential object is a combination of the user account and the password. In the last line in the example above, you can see that the PowerShell variables $Account and $AccountPassword are both required to populate the variable $DatabaseCredentials.

TRY TO REFRAIN FROM USING PLAINTEXT PASSWORDS IN SCRIPTS.

There, I said it. My apologies for "shouting", but plaintext passwords can get you in all sorts of trouble.

*As was pointed out to me in one of the comments below, technically speaking using plain text password does have some advantages. However, looking at the overall system as a whole, taking, among other things, security into consideration, plain text passwords should be avoided as much as possible. From a security perspective, they do not hold any advantages.

Now let's get on with the good stuff. The remainder of this article will show you a couple of ways how to securely use passwords in a PowerShell script.

This is the easiest method of them all, but this method is only suitable for scripts that run interactively.

The second line contains the Read-Host cmdlet. When you run this PowerShell script interactively, you are required to enter the password in the PowerShell window.

Using a 256-bit AES key file and a password file

When you use this method you will generate two files: a 256-bit AES key file and a password file. These files can than be used in your PowerShell scripts on local and remote computers.

How does this work?

Here is an example of the key file and the password file.

You can open these files in an editor such as Notepad, but you will only see gibberish. Once you have created the two files you can keep them on the local computer or copy them to a network share. Copying these files on a network drive means that you can use the same files on multiple computers.

So how do you use these files once you created them?

The following code snippet show you how the PSCredential object retrieves the content from the password file (C:\AES_PASSWORD_FILE.txt), using the AES key in the key file (C:\AES_KEY_FILE.key).

This is all great, but how to create these files?

I have prepared a PowerShell script that you can use for this purpose. It is really quite simple:

I wrote this paragraph based on the following excellent article by Luca Dell'Oca:
http://www.virtualtothecore.com/en/encrypt-passwords-in-powershell-scripts.

The key/password file method described in this section ensures that you do not need to enter any plain-text password directly in your script. After creating both files you copy them to a directory on the local server or on a network share. After that, you only need four additional lines of PowerShell code to read the secure password from the password file and to decrypt it to a normal readable plaint-text string.

In the above code we use the Marshal class to write the secure password to unmanaged memory. We than read this unmanaged memory and store the password in the variable $PasswordAsString. You can test if this variable contains the correct password by adding a simple write-host command:

For those of you who use PowerShell scripts in SCCM applications and packages, a good way of dealing with passwords is to use a collection variable.

When creating a collection variable, make sure that the tick box Do not display this value in the Configuration Manager console is marked. This makes the variable "secure". Secure in this case means that the variable is stored in the SCCM SQL database.

You can use the following code snippet in an SCCM package to retrieve the MyPassword collection variable:

The variable sysnative will redirect the 32-bit process to the 64-bit subsystem and, in our example, will start the 64-bit PowerShell executable (instead of the 32-bit one). 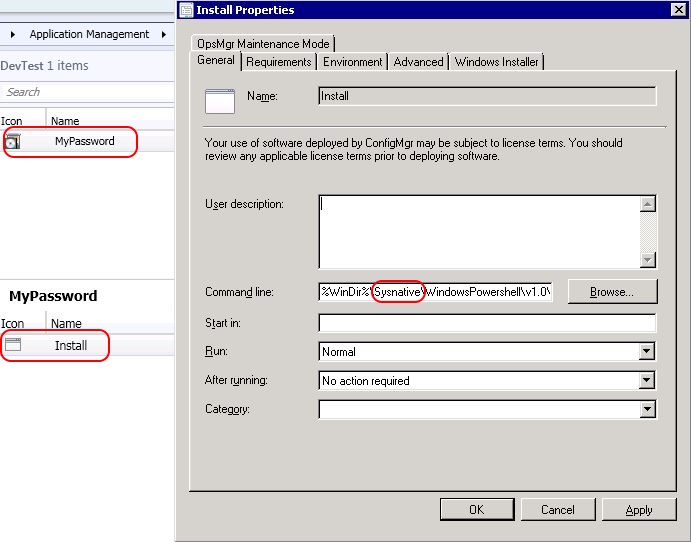 The next step in the script is to retrieve all task sequence and collection variables. When the variable name is MyPassword, it's value is read and stored in the PowerShell variable $AccountPassword.

After that, the PSCredential object is created using the user name stored in the variable $Account and the password stored in the collection variable MyPassword.

For more information on how to create a PowerShell script in an SCCM package please see the following two articles:

One last tip; make sure to watch out when writing the variables to a log file. You do not want to write your password to your log file in plaintext!

Finally, I want to present to you another approach which I found very interesting, namely using the local Windows Credentials Manager to store your passwords.

The PowerShell script can be found in the Microsoft Script Center Gallery:
https://gallery.technet.microsoft.com/scriptcenter/PowerShell-Credentials-d44c3cde

Please be aware that this script has not been tested on newer operating systems such as Windows 10 and Windows Server 2016. Also, this script only works on the local server. The Win32 API CredMan cannot connect to remote computers.

All-in-all, none of the methods presented in this article are perfect. There simply is no 100% perfect solution. Each method has some advantages and some drawbacks, but these methods are all that exist (at least to my knowledge). You need to choose the one which is best suited for your current situation.

I hope this article gave you some insights in the world of passwords and PowerShell. Happy scripting!

13 thoughts on “Encrypting passwords in a PowerShell script”